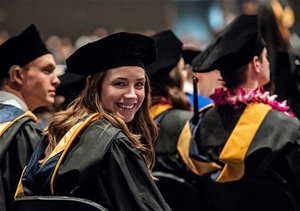 Midwestern University recently held commencement ceremonies on both the Glendale and Downers Grove Campuses to celebrate the start of a variety of healthcare careers. The College of Health Sciences marked the end of summer with a graduation ceremony for 391 students in the Physician Assistant, Occupational Therapy, Nurse Anesthesia, and Clinical Psychology programs. Commencement in Glendale occurred on August 23rd, while the Downers Grove ceremony took place one week later on August 30th.

During the ceremonies, the graduates pledged to dedicate themselves to the highest standards of patient care and to continue learning throughout their professional careers. In addition, Kathleen H. Goeppinger, Ph.D., President and Chief Executive Officer of Midwestern University, congratulated the graduates on their many accomplishments. "I want to thank all of the graduates for being part of the Midwestern University academic family. During their time at Midwestern, they've excelled academically and made a difference on this campus and in the community," she said. Dr. Goeppinger noted the extensive community service, research projects, leadership roles, and academic honors achieved by the graduates during several years of intensive studies.