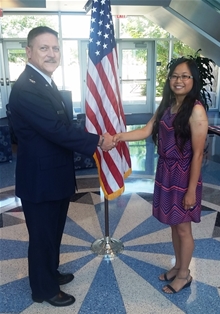 Dr. Donald Noah congratulates Denise Sorbet, VMS-I, after commissioning her into the US Army.

On Friday, May 26, the College of Veterinary Medicine at Midwestern University hosted a commissioning ceremony for a first-year veterinary student who will enter the United States Army upon completion of her doctoral degree program.

Denise Sorbet was commissioned as a Second Lieutenant in the US Army Reserve, in which she will remain during her time as a student at Midwestern. After graduation, Ms. Sorbet will be promoted to Captain in the US Army Veterinary Corps.

The commissioning ceremony was performed by Donald Noah, D.V.M., M.P.H., DACVPM, Director of the One Health Center at Midwestern University and a retired colonel in the US Air Force. As part of the ceremony, Dr. Noah gave Ms. Sorbet the gift of a "unit coin" - a traditional military honor going back to World War I.