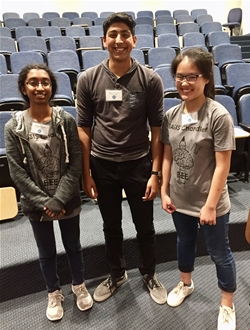 Eighty-five students from 16 Arizona high schools converged on the University's Glendale Campus to test their knowledge of the human brain, how it governs human behavior, and the science that helps medical professionals understand brain function.

The top three Brain Bee finishers, in order, were Rahul Jayaraman, Grace Xu, and Latavya Chintada, all from BASIS Chandler. BASIS Chandler won the team prize for the overall high score for the third straight year.

For his performance in the Brain Bee, Mr. Jayaraman won a $2,000 scholarship towards tuition in any Midwestern University program at either the University's Glendale Campus or the campus in Downers Grove, Illinois, as well as travel expenses to help him as he competes at the upcoming United States Regional Brain Bee in Baltimore, MD.

Midwestern University faculty and students served as judges, question readers, timers, and scorekeepers for the Brain Bee, using the book Brain Facts, published by the Society for Neuroscience, as the source text. Questions ran the gamut from identifying physical features of the brain itself to naming brain disorders and diseases to surgical and medical practices that modify neural behaviors.