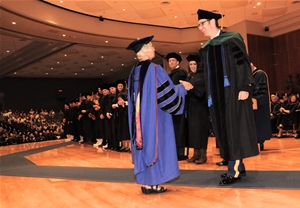 After receiving their degrees and hoods with the rest of their classes, graduates who are either currently serving in or will soon begin military careers were invited on stage with Dr. Goeppinger, who presented them with a special commemorative coin honoring their service. Separate commissioning ceremonies were held to officially induct graduates into their respective service branches.

Each coin features a Midwestern University seal on one side, and on the other, a thank-you message for the student's dedication to serving the United States. The gift is derived from a military tradition dating back to World War I.

"The coin represents a gift in recognition of what these individuals are doing, not only for their professions, but for their country," said Dr. Goeppinger.