Dr. Brysacz was a practicing pharmacist for 13 years before enrolling at Midwestern University's Chicago College of Osteopathic Medicine (CCOM). Graduating in 1971, Dr. Brysacz and his family relocated to Arizona, where he spent 30 years in family medical practice. Dr. Brysacz has been a member of Midwestern's Board of Trustees and the CCOM Alumni Association Board of Governors, and has worked as both a preceptor and as adjunct faculty for the Glendale Campus. He and his family funded the Shirley A. Brysacz Scholarship, which provides financial support to Arizona College of Osteopathic Medicine students with families.

Mr. Evans is an experienced leader in the field of cardiovascular perfusion and has been board-certified for nearly 40 years. He came to Midwestern University in 2003 after two decades of clinical and management experience. He was appointed Director for the Cardiovascular Science Program in 2010 and was promoted to Associate Professor in 2013. Mr. Evans received his Master of Arts in Organizational Management from the University of Phoenix. 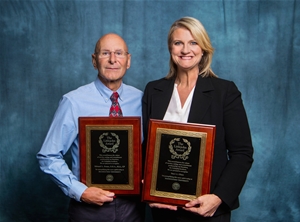 Ms. Glass became a member of the Midwestern University family in 2014, when she was hired as Director of Development and Alumni Relations. This year, she was promoted to Director of Institutional Advancement, overseeing the development and alumni departments at both of the University's campuses. Ms. Glass's experience encompasses over 20 years of nonprofit work in the Valley.  She has worked with such organizations as Hacienda HealthCare and Florence Crittenton of Arizona.  She has also volunteered for a variety of organizations such as the Johnjay and Rich LoveUp Foundation, Phoenix West Rotary, and the Ronald McDonald House.

The Littlejohn Awards take their name from the Littlejohn brothers, physicians who in 1900 founded the American College of Osteopathic Medicine & Surgery, the precursor to the Chicago College of Osteopathic Medicine, the founding college of Midwestern University. The awards, which have been presented annually since 2000 by Dr. Goeppinger, are Midwestern University's highest honor. Littlejohn Award winners are selected from Midwestern faculty, staff, and alumni for their outstanding service to the community, healthcare professions, and the University.

Midwestern University extends the warmest congratulations to these outstanding representatives of the University and the healthcare community.