Dr. Martinez-Guryn received her Ph.D. from the University of North Carolina at Greensboro (UNCG) in 2011. She next completed the dietetic internship the following year at UNCG, and at the end of 2012 joined the laboratory Dr. Eugene Chang at the University of Chicago in the Department of Medicine - Section of Gastroenterology, Hepatology, and Nutrition for her postdoctoral training. In August of 2017, Dr. Martinez-Guryn joined the Biomedical Sciences Program at Midwestern University as an Assistant Professor. 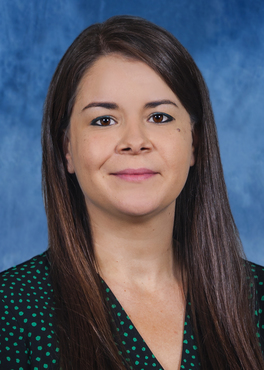 Our bodies are inhabited with trillions of microorganisms that reside largely in our gastrointestinal tracts. The gut contains 500-1000 different species that are collectively known as the gut microbiota. Gut microbes act as sensors of their environment that can elicit a reciprocal response, thereby impacting the health of the host. For example, fecal microbiota transplant from an obese donor can lead to an increase in fat mass in a lean recipient. Numerous studies have examined the types and abundance of bacteria in the GI tract and how microbiota structure changes under certain dietary conditions, disease states, or altered genetic backgrounds. In particular, diets high in fat profoundly alter gut microbiota structure within only one day and can have lasting effects even after switching to a low fat diet. The overall goal of my lab is to identify obesogenic microorganisms and understand how they interact with the host to promote obesity and associated metabolic disorders. Conversely, we are also interested in identifying microorganisms that promote a state of leanness. It is expected that understanding these host-microbe interactions will lead to the identification of therapies to either prevent the development of obesity or to increase nutrient absorption in conditions of malnutrition.

The Role of Gut Microbes in Regulating Lipid Absorption. Mice that are raised germ free (GF), devoid of all microorganisms, remain lean after weeks of being fed a high fat (HF) diet. There are several explanations for this but one is that these mice are unable to properly digest and absorb fat. Dietary shifts are known to dramatically impact the composition of the gut microbiota. However, most work focuses on examining changes occurring in the stool or cecal contents. My work shows that diet-microbe interactions are most profound in the upper small intestine where nutrient absorption takes place. The goal of this project is to understand how dietary fat alters the small intestinal microbiota, and how microorganisms in the small intestine regulate fat digestion and absorption.

The Interaction between the Constitutive Androstane Receptor and Gut Microbiota in Metabolic Disease. Another mechanism to explain the obese-resistant phenotype of GF mice is increased peripheral metabolism such as in the liver or adipose tissue. Interestingly, GF mice have upregulated expression of the Constitutive Androstane Receptor (CAR) and its target genes in the liver. This nuclear hormone receptor is classically known for its role in regulating genes involved in xenobiotic or drug metabolism. My work shows that mice deficient in CAR, gain significantly more weight and body fat on a HF diet compared to wild-type controls. Interestingly, these mice also display a change in their gut microbiota that resembles the gut microbiota structure seen in obesity. These findings suggest that CAR may be a critical player in whole body metabolism and is influenced by the gut microbiota and vice versa. Therefore, the goal of this project is to understand the interaction between CAR, the gut microbiota, and the development of obesity and associated metabolic dysfunction.

Member, Academy of Nutrition and Dietetics (AND)

Member, Society for Advancement of Hispanics/Chicanos and Native Americans in Science (SACNAS)