Dr. Medha D Joshi is an Associate Professor in Pharmaceutical Sciences at Midwestern University’s Chicago College of Pharmacy. Dr Joshi has expertise in lipid based drug delivery systems including solid lipid nanoparticles (SLN), micro emulsions, self emulsifying drug delivery systems (SMEDDs), nanosuspensions, and liposomes, targeted drug delivery etc. Her research program at Midwestern university is focused on application of nanoparticulate targeted delivery a) to neurogenetic peptides for their delivery to the blood brain barrier and b) reduction of maternal-fetal toxicity of drugs across the placental barrier. She has more than 30 peer reviewed research articles, 2 patents and 3 book chapters to her credit. She has been a Principle Investigator and co-investigator on several intramural and extramural grants such as Alzheimer’s Drug Discovery foundation, NIH AREA grant etc. 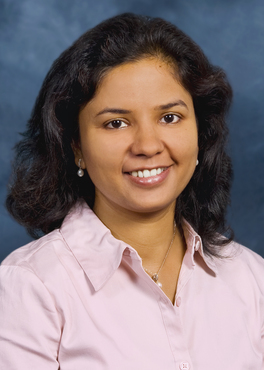 1.     Design and development of a clinically acceptable, long circulating liposomal delivery system for IRL-1620 and its evaluation in cerebral ischemia rat models.

In the present study, we propose to test the hypothesis that polyethylene glycol (PEG)ylated liposomal delivery of ETB receptor agonist, IRL-1620 may be efficacious in the treatment of cerebral ischemia. PEGylated liposomes encapsulating IRL-1620 with and without a cationic charge and "targeted" PEGylated liposomes to the transferrin receptor on the brain endothelium will be formulated. Further, these nanocarriers will be tested for their neuroprotection efficiency on pheochromocytoma cells in vitro. The liposomal nanocarriers of IRL-1620 will be elucidated for their ability to accumulate in the brain and amelioration of infarct volume, neurological deficit and motor functions in vivo, in a cerebral ischemia rat model. This study will help in generating the proof of concept that by delivering IRL-1620 in long circulating PEGylated liposomal nanocarriers, higher efficiency in dose and dosing frequency can be achieved. This will have a tremendous clinical significance in the management of stroke, wherein restoration of blood flow and attenuation of secondary damage to the penumbral area by IRL-1620 will be achieved for a longer period of time with fewer side effects and at a higher efficacy.

3. Classifying and overcoming fetal and maternal vancomycin-induced kidney injury: a pregnant rat model to understand and a new formulation to circumvent

Approximately 90% of pregnant women and their fetuses are exposed to at least one medication during the pregnancy. The FDA previously classified the safety of medications in pregnancy as “A,B,C,D, or X” (X=teratogenic/avoid) according to their teratogenicity potentials; however, these classifications have been removed. Hence, clinicians are forced now more than ever to rely on primary medical literature for the safety of drugs during pregnancy. Vancomycin is a commonly used antibiotic during pregnancy for the treatment of severe sepsis and a candidate drug for our study. Although vancomycin was previously FDA classified as pregnancy category B, emerging data suggest kidney damage in adults. Further, data suggests that vancomycin crosses the placental barrier, though early toxicity studies have not employed the more sensitive assessments of kidney function necessary to classify damage, thus less is known about vancomycin’s toxicity to the fetus. Because of the common use and importance of vancomycin for life-threatening infections to the mother, vancomycin serves as a candidate drug for 1) improved understanding of the relationship between drug exposure and fetal kidney toxicity and 2) molecular modification to retain efficacy while circumventing toxicity to the mother and fetus.

Details: Methodologies that were not previously studied, such as the analysis of Kidney Injury 1 molecule, are highly sensitive and specific for vancomycin kidney injury. Additionally, we will measure vancomycin concentrations in the rat pup kidneys to see if accumulation occurs.

Details: The parent compound will be encapsulated in liposomal core in order to minimize transplacental crossing to the fetus and renal tubular transit for the mother, thereby circumventing injury for both fetus and mother.