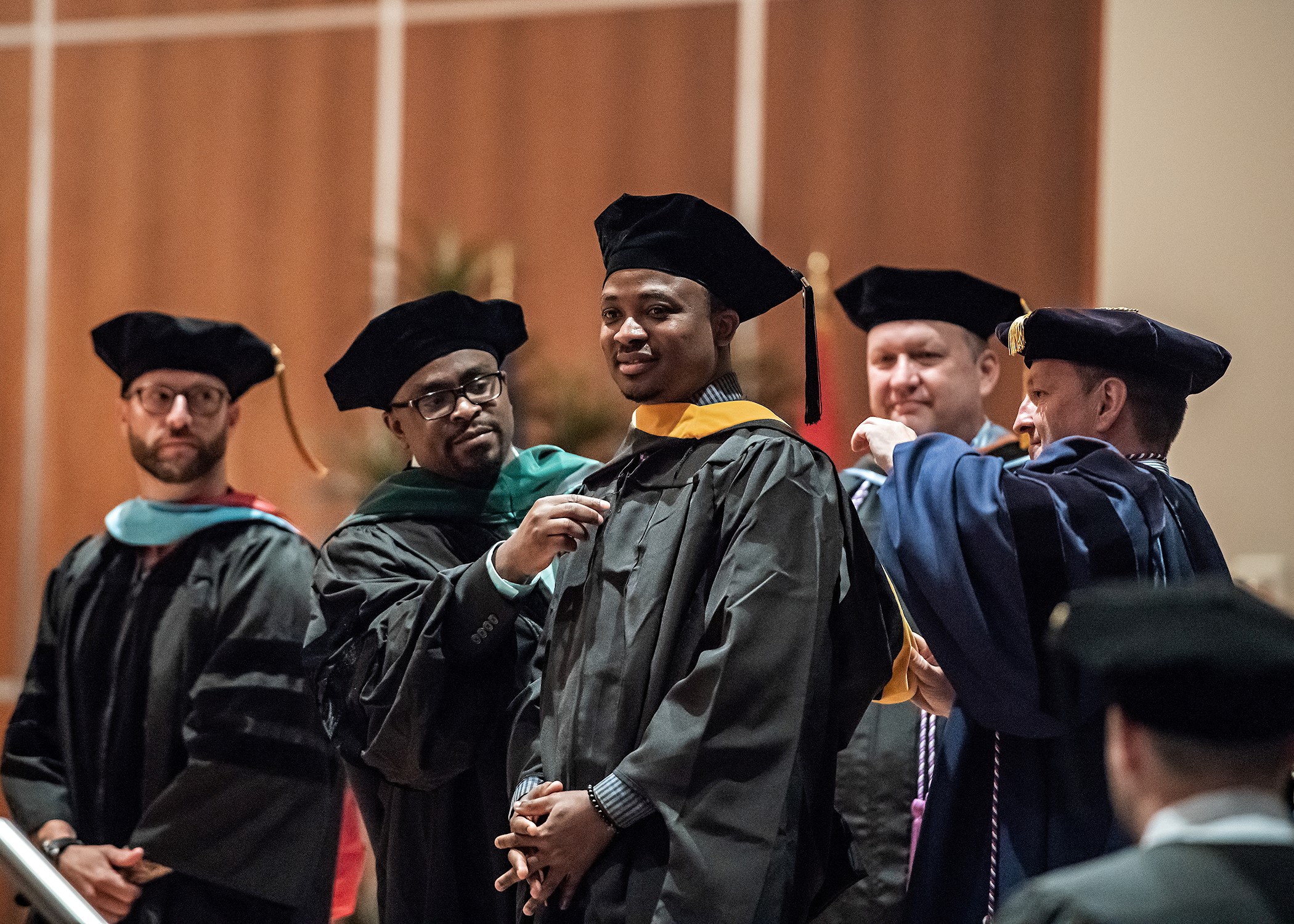 The gown is the cornerstone of the academic costume that has its origins in 12th and 13th century Europe, a period when universities were being formed. Today, Midwestern University follows guidelines established by the American Council on Education. All graduates wear black gowns, with the front panels of the doctoral gown trimmed in black velvet. Each sleeve of the doctoral gown is adorned with three bars of black velvet with bell-shaped wrist ends. The master's gown is unadorned, with the wrist ends of the sleeve open oblongs that extend beyond the hand.

The hood, a commencement accessory placed around the neck that drapes down the back of the graduate's gown, signifies achievement in higher education. Its velvet top layer is the discipline color of the program of study. Both the lining and the chevron trim colors are those of the college or the program. The doctoral hood is four feet in length; the master's hood is three and one-half feet in length. At Midwestern University, the hood is carried over the right arm of the graduate in the processional and is placed on the graduate during the ceremony.

Midwestern University graduates receive braided cords signifying special honors. The honor cord, nearly six feet in length, is worn around the graduate's neck and drapes down the front of the gown. A graduate can wear multiple cords if he or she qualifies for individual honors.

The official symbol of authority of the Office of the President of Midwestern University is the presidential medallion. Worn around the neck of the President at all University commencements, the medallion, imprinted with the University seal, is attached to a chain of office featuring tiles with the names of all nine previous leaders of MWU and its Founding College. The 24-karat gold-plated medallion and its chain were originally crafted in 1988 for the inauguration of the President of Midwestern University. The medallion was updated in 1995 for the inauguration of Kathleen H. Goeppinger, Ph.D., the ninth University President. The medallion's seal contains an academic bell tower; the Staff of Asclepius, the symbol of the medical profession; Trees, symbols of learning with branches representing the many educational opportunities available at MWU; and the Date of 1900, the year the first college of the University was founded. Engraved on the nine golden tiles that comprise the 36-inch chain are the names of the current President and her eight notable predecessors.