What if we need both sides of this coin? What if it takes a great idea to quell a physical firestorm?

Building blocks of life. Like an artist doodling on a sketchpad, the young chemist sits at his desk with pen in hand, notebook and page margins filled with chemical equations, as he muses about the groups found in a drug molecule that treats convulsions associated with epilepsy. 'Yes, I know this drug works,' he tells himself. 'But how can I make it work better? What happens if I alter this atom? Or add a different group to the mix? Will it have any effect on the biological response? How will it work in the brain and the body?'

With 30 percent of patients not currently benefiting from existing drugs for epilepsy, the chemist recognizes the great need for new pharmaceuticals. Could his compound be — or contribute to creating — a valuable anticonvulsant medication? His curiosity sparks interesting combinations he wants to try in the laboratory. Solving puzzles is part of the fascination. 'Why do some patients respond to a drug for a time and then it stops working for them?' he wonders. 'Is there a problem transporting the drug to the brain? Or has the receptor site in this patient's brain somehow changed so the drug no longer works? Maybe something genetic makes this drug ineffective.' Answers appear over time.

For Shridhar Andurkar, associate professor of pharmaceutical sciences in the Chicago College of Pharmacy (CCP) at Midwestern University, the processes of medicinal chemistry and teaching others about it are his passions. "My hobby is thinking about chemical structures and the molecules I'm currently making in my lab. Like every good chemist, I always want to find out if I can make something that works well work even better. Can I uncover a new mechanism to benefit the epilepsy patients who don't respond to current drugs?" Given that Andurkar has already patented one new molecule and is working on several others, the answer may soon be "yes."

“ Like every good chemist, I always want to find out if I can make something that works well work even better. ”

At Midwestern University, Andurkar shares his passion for medicinal chemistry with up-and-coming pharmacy students. Is the process of drug discovery planned, serendipity, or a combination of both? Andurkar encourages students to unleash their curiosity, doodle, experiment, speculate, immerse themselves in the mystery, the intrigue, the puzzle. Continually modifying active ingredients and trying again and again could result in a compound, a patent, a pharmaceutical that benefits thousands.

"No branch of pharmacy will stand on its own without a good basic science foundation," says Andurkar. "Midwestern University faculty work hard to make medicinal chemistry relevant to the practice of pharmacy. We focus on removing students' fear of chemistry and basic science," so they can succeed. Andurkar and his colleagues coordinate course planning, preparation, and presentation to create continuity between lecturers, as well as agreement and consistency in the use of language and chemical terminology. "That way, students 'get' it and feel confident in their knowledge," he says. In addition to courses in the medicinal chemistry sequence, Andurkar follows his passion for tinkering with molecules as he teaches Drug Design and Molecular Modeling, OTC Products, and the chemistry section of the PCAT review course.

Andurkar first discovered his love for the classroom as research/teaching assistant at Auburn University in Auburn, Alabama. During his postdoctoral fellowship and as a visiting assistant professor in the chemistry department at the University of Houston (TX), "I found I really enjoyed teaching," says Andurkar. Student feedback confirmed he was good at it. He must still be doing something right: during a period of six years at MWU, Andurkar received five CCP Teacher of the Year awards and four Golden Apple awards, as well as the 2008 Littlejohn Award, presented to an outstanding faculty member by the Midwestern University president. "Student feedback tells me they understand what we're doing in class," says Andurkar. "Each year, they recognize a faculty member who has had the most impact on them throughout their years at Midwestern University. It's an honor and very humbling to be a recipient of all the teaching awards." 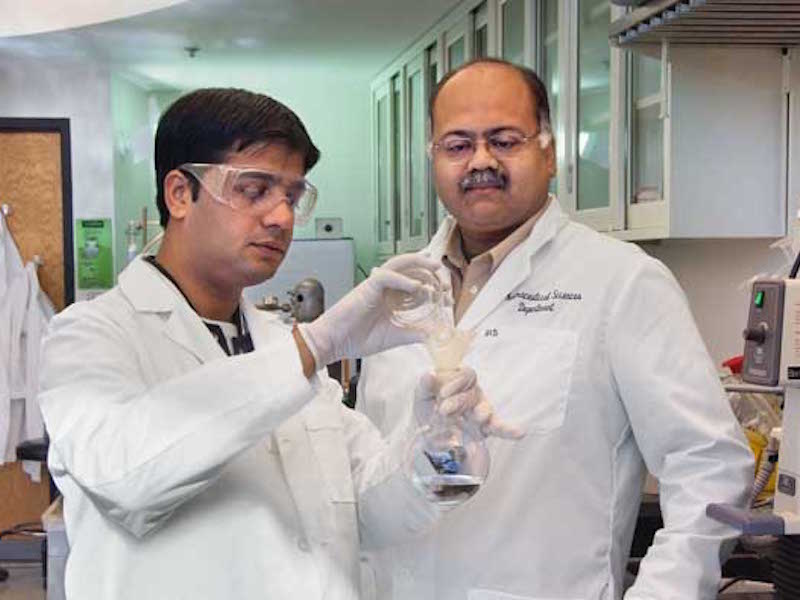